The Dynamics of Micro-Task Crowdsourcing

May 19, 2015
On 20 May 2015 Dr Gianluca Demartini of the Information School will present a paper on 'The Dynamics of Micro-Task Crowdsourcing' at the 24th World Wide Web Conference in Florence, Italy.

Micro-task crowdsourcing is a modern technique that allows outsourcing of simple data collection tasks to a crowd of individuals online. Tasks such as image annotation, document summarisation, or audio transcription are easy for humans to complete but very challenging for computers. micro-task crowdsourcing is commonly used to build information systems that combine the scalability of computers over large amounts of data with the quality of human intelligence.

Over the last 10 years different micro-task crowdsourcing platforms have been created. These platforms are marketplaces where crowd workers complete tasks (usually called Human Intelligence Tasks or HITs) in exchange of small monetary rewards and where requesters post their data and tasks to quickly obtain large scale annotations.

As part of research carried out with Difallah, Catasta, Ipeirotis and Cudré-Mauroux, Gianluca analysed logs between 2009 and 2014 from the most popular crowdsourcing platform: Amazon Mechanical Turk and observed the evolution over time of its usage. This research will be presented at the World Wide Web Conference, and the full paper is available here.

The main findings from the research are: 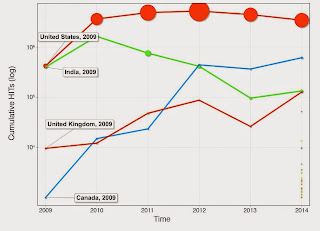 Above: Cumulative HITs (log) per country plotted by time 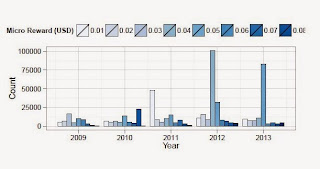 Above: Micro Reward per year

There has been a wave of interest in UK academic libraries in developing services to support student well-being. This paper identifies three fundamental and interrelated issues that need to be addressed to make such initiatives effective and sustainable. Firstly, well-being has to be defined and the impacts of
interventions must be measured in appropriate ways. Secondly, there is a need to identify the true nature of the underlying social problem around well-being. Thirdly, relevant approaches to the issue need to be located within the professional knowledge base of librarianship.
To read the article, click here.
Post a Comment
Read more