A couple of weeks ago I travelled to Atlanta, USA to attend ACM FAT* - an interdisciplinary conference that addresses issues of Fairness, Accountability and Transparency in Machine Learning. Officially, I was there on the hunt for potential papers and authors to invite to submit their work to Online Information Review. However, the FAT* field is also closely related to my research interests around the politics of data and algorithms, and my teaching on the Information School’s MSc Data Science. I was keen to check out what was happening in the FAT* community, and feed my findings back into my teaching and into two new projects I am working on in this field: CYCAT & supervising a new PhD student – Ruth Beresford – whose research will investigate algorithmic bias in collaboration with the Department for Work and Pensions.

I was privileged to hear a number of great papers – the best of which engaged critically with issues of social context and justice. My two favourite papers which I highly recommend for anyone interested in these topics were:


Fairness and Abstraction in Sociotechnical Systems (Selbst et al, 2019) was a great paper that spoke to a sense of unease I have felt recently about the increasing amount of technical work attempting to solve the ‘algorithmic bias problem’. The paper – written by an interdisciplinary team of social and computer scientists - not only speaks to such concerns in an engaging and insightful way, but also offers a strong analytical framework that illuminates five “traps” that such technically-driven work often falls into:


Putting some of these ideas into practice was my second favourite paper – which also won the prize for best technical and interdisciplinary paper - Disparate Interactions: An Algorithm-in-the-Loop Analysis of Fairness in Risk Assessments (Green and Chen, 2019).

With a focus on risk assessments being used in the US criminal justice system, the authors argue that given risk assessment tools do not actually make decisions, but are used to inform judges’ decisions, it is important to understand how people actually interpret and use the outputs of these tools. Their study is based on an experiment involving Amazon Mechanical Turk workers – rather than actual judges – however, their findings are concerning. They found their participants under-performed the risk assessment tool even when presented with the prediction of the tool; they were unable to effectively evaluate the accuracy of their own decisions or those of the tool; and, most concerning they exhibited biased interaction with the tool’s prediction whereby use of risk assessments in decision making led to participants making higher risk predictions for black defendants and lower risk predictions for white defendants. Clearly, these findings need examining ‘in the wild’, but they are concerning, and evidence the importance of a socio-technical framing as called for by Selbst et al.

While there were some excellent papers presented at FAT*, there were also a good few that fell into some of the ‘traps’ of abstraction identified in Selbst et al’s paper – and this resulted in some interesting commentary about the nature and direction of the field. For example, important questions were raised by Stanford PhD student Pratyusha Ria Kalluri, who drew upon Catherine D'Ignazio and Lauren Klein’s forthcoming book Data Feminism, to question the language of fairness, accountability and transparency, and how it relates to notions of justice. Her comments received a lot of support from attendees and online: 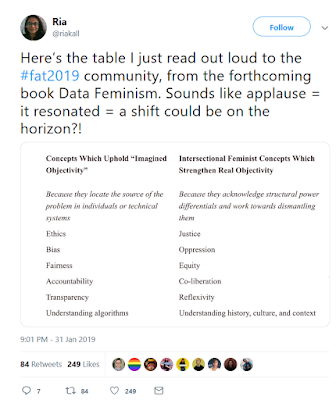 Pratyusha’s observations reflect many of my own – and others in the Critical Data Studies space - concerns about what it means to work across disciplinary boundaries in this field, and the politics of engaging in such work with people who may have very different agendas, assumptions, and understandings about what is at stake. It can sometimes be difficult to know how best to navigate these tensions – but it feels like 2019 could be an important moment for shaping the direction of the field.

There has been a wave of interest in UK academic libraries in developing services to support student well-being. This paper identifies three fundamental and interrelated issues that need to be addressed to make such initiatives effective and sustainable. Firstly, well-being has to be defined and the impacts of
interventions must be measured in appropriate ways. Secondly, there is a need to identify the true nature of the underlying social problem around well-being. Thirdly, relevant approaches to the issue need to be located within the professional knowledge base of librarianship.
To read the article, click here.
Post a Comment
Read more