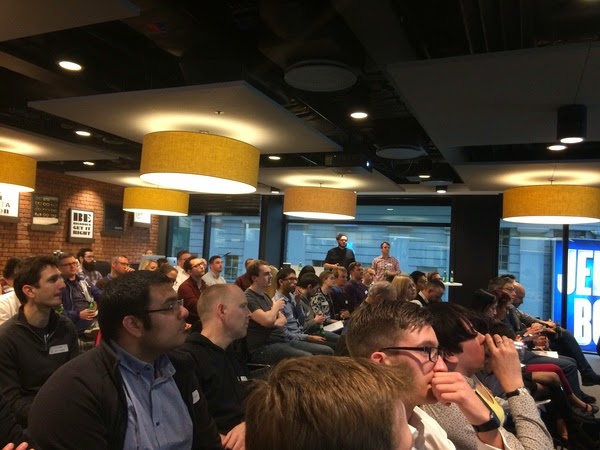 The first Studies in Social Data Meetup at Twitter London was held on the 1st of April, with 150 attendees who were all eager to discuss different aspects of social data. The event was organised by Patrick Callahan from compassRed and Carl Davis from so adaptive. The event was co-sponsored by the Big Boulder Initiative (BBI). Farida Vis, Faculty Research Fellow in The Information School and involved in the BBI, contributed to opening the event by saying a few words about what the initiative is about and to flag up the upcoming Big Boulder conference this summer. In opening the Meetup Patrick and Carl commented that the event had a good turnout from both academia and industry, which was seen as positive.

The event provided an overview of how social data is used in industry, government, and academia, and the different perspectives of these sectors.  I attended the event as the talks were very relevant to my PhD, and particularly the talk by Dr. Siân Thomas, who outlined some of the work the Food Standards Agency (FSA) have conducted on food borne illnesses using Twitter data.

The event provided the opportunity to network before and after the talks, and which allowed me to talk to various people from the social data industry. I found that there was great interest in the MSc programs run by the Information School, such the Data Science program. The event also provided the opportunity to talk to those wishing to pursue an MSc from industry, and also to have talks with Data Science recruiters, such as, Salt Recruitment.  Therefore, the event provided a great networking opportunity to forge closer ties with industry. As the event was actively tweeted, this report is accompanied by a Storify I made after the event, to go with a blog post Farida was invited to write for the LSE Impact Blog. That post can be found here.

Overall the event was very well organised, highlighted and strengthened the existing relationship of the Information School with those from government, academia, and industry who all shared an interest in social media and social data. The event was also useful for me, as it provided some insight on how industry, government, and academic researchers are using social data in very different ways.

Below are brief outlines of the three presentations, for anyone unable to attend the event:

Presentation 1: Randy Almond, Head of Data Marketing at Twitter: An overview on the global nature of social data and the different ways that it's being used around the world.

In this presentation Randy Almond outlined the value that Twitter data can provide to both academia and industry. Because Twitter data is shared in real-time, it has the potential to provide insight into public opinion across the globe. Twitter data is bundled with a range of metadata, and, although, a tweet may only consist of 140 characters, there are over 65 data elements; for instance, geolocation data. Among these data elements, there is information, such as, what platforms and devices users are tweeting from.

Randy outlined a case study where Twitter data was deployed to discover what devices were being used to send tweets. Randy talked about the research in Indonesia related to flood warning systems, and research that has been able to detect food borne illnesses faster than traditional methods, by monitoring conversations at a larger scale. That is, by using Twitter’s geolocation data to better predict flood levels in Indonesia, and for the prediction of power outages. This research has the potential to save lives, as correct information to authorities during crisis situations is vital. Both these projects were supported through the Twitter Data Grants programme.

Randy also talked about how Twitter data is employed in industry and how it aids businesses to make smarter decisions. Randy discussed how brands have started to utilize data from Twitter such as Dove, Samsung, and Mountain Dew, in order to better understand their markets.  A case study of Samsung was presented, that Samsung used Twitter data as a ‘survey data’ to gain insight on what their competitors were lacking, in this case Apple, that Apple phones have a small screen size and a low battery life.

The FSA have successfully used social media to communicate about safe food practices and behaviour change, and to also research public views and opinions related to food borne illnesses. The reported benefits of using Twitter data to gauge public opinion is that tweets are available on a significantly larger scale and are likely to contain more truthful reactions and responses. In comparison to traditional methods used by the FSA, which have a low response rate, and possibly contain answers that members of the public feel that FSA are ‘looking for’.

The FSA have developed search queries in order to track the incidence of the Norovirus infection, a winter vomiting bug, using factor analysis. In comparing lab reports and tweet volumes they have found that 70% of the time their predictions about Norovirus spreading are correct. And Dr. Siân argued that this demonstrates the power of Twitter in relation to tracking such illnesses.

In engaging with members of the public the FSA also outlined their allergy awareness week, and specifically their Thunderclap campaign in order to promote #AllergyWeek2014. FSA discussed issues of the Twitter API ecosystem, specifically that it is difficult to ascertain the representativeness of Twitter data, as well as the high cost of using Firehose data (‘all the tweets’ instead of a sample).

However, the FSA have employed innovative methods such as using Social Media influencers, celebrities, to reach more people with their campaign. Future research activity by the FSA include ways to better predict incidences of food borne illness, and to better understand events such the horsemeat incident.

Dr. Siân ended her talk by acknowledging the work that has involved the University of Sheffield, and the Information School.

Francesco opened his talk by acknowledging the work of the Foods Standards Agency and that with the University of Sheffield, and the Information School.

Francesco stated that algorithms can still be bad at recognizing pictures and identifying the content of the picture. Francesco also demonstrated the power of audience tracking by outlining some of the research conducted for industry clients. For instance, the research for O2 on network disruptions found via keyword tracking. Francesco also discussed their current research on emotion and virality, and to understand public perceptions on infectious diseases, such as common remedies to the flu.

Overall, the event was very well organised with a great atmosphere, and it provided a great overview of how social data is used in industry, government, and in academia. The event was also useful for networking and provided an opportunity for me to talk about my research, and the programmes offered at the Information School.

New Article: European Union Librarians on the Move? An Exploration of Potential Impacts of Brexit on Workforce Diversity.

February 05, 2020
European Union Librarians on the Move? An Exploration of Potential Impacts of Brexit on Workforce Diversity. Our Director of Research and Senior Lecturer, Dr Andrew Cox, has published a new article alongside Josefine Blunk and Melanie Benson Marshall.  The study investigated whether the academic library sector in the United Kingdom (UK) could be in danger of experiencing a decline in workforce diversity following the Brexit vote. A web survey was distributed to academic libraries and library information science (LIS) departments across the UK. Follow-up e-mail interviews were conducted with twelve individuals. Participants were very worried about effects of Brexit on their right to reside in the UK. Two years after the referendum they still felt a high degree of uncertainty about their future. Most participants wanted to stay in the UK. While about a third considered leaving due to Brexit, 21% were undecided and 14% had made concrete plans to leave. However, the reasons for leav
Post a Comment
Read more

February 07, 2020
Services for Student Well-Being in Academic Libraries: Three Challenges   Our Director of Research and Senior Lecturer, Dr Andrew Cox, has published a new article alongside Dr Liz Brewster at Lancaster University. There has been a wave of interest in UK academic libraries in developing services to support student well-being. This paper identifies three fundamental and interrelated issues that need to be addressed to make such initiatives effective and sustainable. Firstly, well-being has to be defined and the impacts of interventions must be measured in appropriate ways. Secondly, there is a need to identify the true nature of the underlying social problem around well-being. Thirdly, relevant approaches to the issue need to be located within the professional knowledge base of librarianship. To read the article, click here.
Post a Comment
Read more